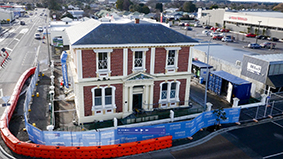 With building demolition a common sight in Christchurch over the past few years, it’s refreshing to see one being given the chance to stand strong for years to come, particularly so when the building is a 130-year-old, Category One Heritage New Zealand listing.

Suffering significant damage from the region’s 2010/2011 earthquakes, the old Bank of New Zealand building in the Canterbury township of Kaiapoi underwent the first stage of its restoration, with level correction successfully completed by Mainmark Ground Engineering.

Kaiapoi was hit hard by the earthquakes, with thousands of buildings and homes severely damaged, and many consequently demolished.

The old bank building was one of the few remaining local heritage buildings still standing. Purpose-built for the BNZ in 1883, the building is a well-known local landmark, perched on the corner of the town’s main street.

The building’s owner, Kaiapoi businessman John Shivas, was among many who were keen to completely restore the old bank. He worked closely with the supportive local council, driving the project to ensure it went ahead.

Before internal and external work could begin, the iconic building had to be re-levelled. Already with obvious damage, there was significant concern the structure would suffer further damage during level correction. Keeping that to an absolute minimum was key to ensuring reparation costs could stay within reach.

The 250 tonne building had subsided across the entire footprint, towards the north-east corner by more than 200mm. Throughout the project, Mainmark ensured the entire structure was uniformly and continually supported, and then raised back to level, without any new stresses being introduced, or effecting the structural integrity of the building.

Industry specialists Mainmark use non-invasive ground engineering techniques that have little, if any, negative impact on a structure and the land around it.

The JOG method, a computer-controlled grout injection system which injects specialised cement grout at pre-determined locations, was selected as the best solution to this challenge.

Linked to a Central Control Computer, JOG “androids” are positioned at multiple injection locations beneath the building to control the sequence of injection and quantity of material delivered, ensuring the lift achieved is gentle and uniform.

Mainmark has corrected hundreds of buildings in Christchurch and thousands around the world. Notably, the JOG method was used to re-level the Christchurch Art Gallery, though on a much larger scale for the four-storey, 30,000 tonne building.

“It’s had great success since it was created in Japan more than 20 years ago. We’ve used it on residential and non-residential buildings with excellent results.”

Mainmark project supervisor Victor Chirilas says the method has been likened to keyhole surgery — “injection holes are very small, no larger than 40mm in diameter”. This meant there was minimal impact to the historic floors, so they did not need to be removed and risk further damage.

“The first stage of the injection was to ensure the building was evenly supported, and to create an improved base to lift from. Once this was achieved we could begin raising the building,” Mr Chirilas says.

The depth and location of the injection process is dependant on existing ground conditions — voids are filled and any weak ground is strengthened by the process.

“With the bank, grout was injected at various levels across the entire footprint of the foundation system, effecting a treatment zone to two metres or more beneath it.”

The JOG method is sensitive to a structure and any damage it has received. Lift is millimetre by millimetre at multiple locations across the footprint of the building simultaneously, effectively floating the building up. There is a high degree of control at all times, with constant monitoring allowing for adjustments, as required.

The building’s construction, current condition and the degree of lift required were all considerations in the design of the injection array. One hundred 40mm diameter injectors were installed beneath the perimeter and internal foundations of the building, including the existing bank safe. Lifting was gentle, uniform and gradual, protecting the fragile nature of the building.

Continuous surveying, internally and externally, was delivered via the fully automated Trimble monitoring system and manual assessment. Dumpy levels and Zip levels were used in tandem with the Trimble system.

The wireless OTA-connected system provided accurate reading of the external part of the building to Mainmark’s onsite computer, at 15-minute intervals. The high degree of monitoring was a key contributor in achieving such an accurate and precise outcome.

Remediation and re-levelling was entirely successful, delivering a sound base for the building’s footings and restoring the building back to level. The non-invasive method applied ensured no further significant damage or consequent costs, allowing the restoration of the project to continue as planned.

From start to finish, including site preparation and clearing of rubbish and overgrown vegetation, the project duration was 35 days.

Many Kaiapoi residents turned out to watch the process, though with such a gentle and gradual lift, Mr Chirilas says “it was a little bit like watching paint dry”.

Now the building is back to level and sitting on firm ground, locals can enjoy watching the restoration of their historic landmark unfold.