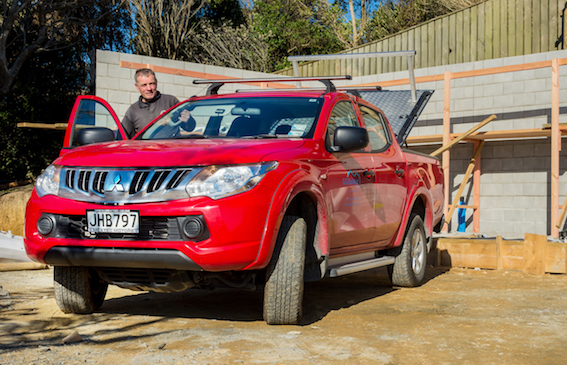 Tough, economical and reliable, Mitsubishi Triton is built for those who work hard and play harder — and it’s the only ute with a 10-year warranty.

Whether you’re on the job, taking the boat out, or off on a family holiday, Triton will get you there.

Tawa-based GG Builders owner Geordie Grieve has worked in the construction industry for more than 30 years, and upgraded his old ute to a new Triton 4WD double-cab GLX in September last year.

He describes his new Mitsubishi as “the best vehicle I’ve ever owned — it’s so good to drive that my wife and I decided to take it on holiday rather than use our other car”.

Geordie says he chose Triton for three reasons. “It’s affordably priced, the extended warranty is fantastic, and my local dealer Mexted Mitsubishi has a great service reputation — which has proven to be true, as they’re great to deal with.”

Geordie’s racked up nearly 25,000km in the Triton in 10 months, and is impressed by the power and efficiency of the 2.4L all alloy DiD MIVEC turbo diesel engine.

“The other day I was towing half a tonne up through Ngauranga Gorge (an 8% gradient hill heading north out of Wellington) and the Triton hummed along at 80km/h no problem — it didn’t even feel like there was a trailer on the back!

“The fuel economy is excellent. It’s costing me half as much to run as my previous vehicle.”

Geordie also rates Mitsubishi All Terrain Technology — a combination of traction systems that enables Triton to operate in any conditions, and which was developed in the cut and thrust of the gruelling Paris to Dakar rally.

“I’m on a steep, muddy job at the moment, and the 4WD handles it with ease,” he says.

“I can even fit my whole team of four in the double cab, which is really convenient. I couldn’t be happier!”

Right through to the limited edition Charger X with diff lock, there’s a Triton that’s right for everyone.