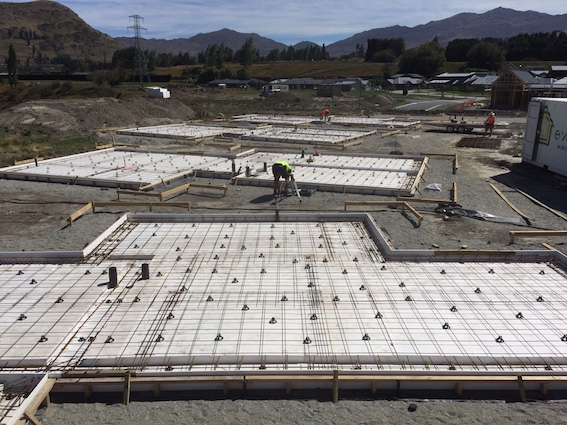 The award-winning company took home the Destination Queenstown Best Emerging Business Award at a gala dinner recently, and was also a finalist in the SIT Excellence in Construction, Trade or Services Award category.

The judges commented on the fact that MAXRaft had developed an innovative product particularly suited to the region, and praised it for its growth plans and scalability.

The award win is the “icing on the cake” for the insulated foundations company, after being named the Fastest Growing Manufacturer for Otago at the recent Deloitte Fast 50 regional awards.

General manager Henry Edney says it’s been a year of recognition for the company.

“Being named Queenstown’s Best Emerging Business is a significant achievement by any standard, particularly when we were up against some very strong competition,” he says.

“We’ve come so far in such a short period of time, and it’s humbling to be involved with so many awards.

“The win is a testament to the company’s hard working team and continued development of an outstanding product.

“Our success is measured by the number of slabs sold, and our ability to make the product affordable for home and commercial property owners around the Southern Lakes and nationally.”

“We’re bridging the gap in cost between MAXRaft and conventional slab systems to ensure that everyone can have an energy-efficient home.”

MAXRaft is the only fully-insulated concrete slab available in the market. The patented edge profile is unique, and contributes to the slab having an R-Value (measure of thermal resistance) three times that required by the building code.

The company has been recognised for its year-on-year growth twice by Deloitte, and is once again in the running to be named on the 2016 national Deloitte Fast 50 index.

The company was also a top six finalist for the 2016 Westpac Business Growth Grants, out of 400 companies entered.

Mr Edney says the team is committed to supplying foundations to the Southern Lakes.

“We’re aiming to reach 50% of the residential slab market in Southern Lakes to ensure locals are living in warm, healthy homes from the foundation up,” he says.

“I want to say a huge ‘thank you’ to the Queenstown Chamber for giving us the opportunity to celebrate business excellence within the town’s vibrant business community.”