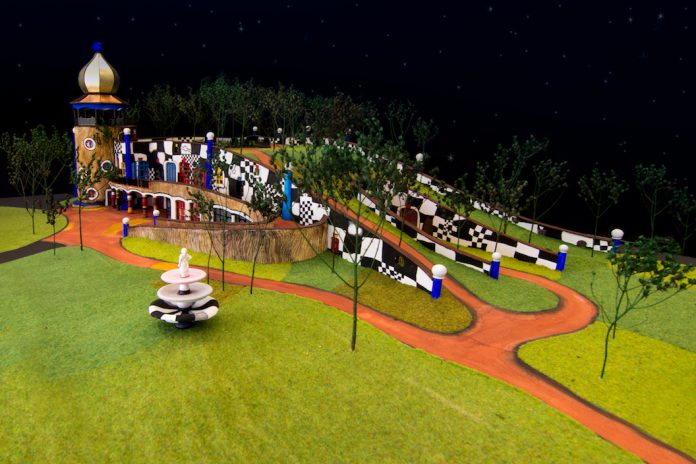 The Northern Branch of the Auckland Registered Master Builders Association is fundraising to help get construction of the Hundertwasser Art Centre underway.

Work on the $16.25 million Whangarei facility known as the Hundertwasser Art Centre with Wairau Maori Art Gallery (HAC) will begin in 2017 if funding is completed.

The HAC will be the last authentic building in the style of the man who called himself Friedensreich Hundertwasser.

Mr Hundertwasser was an Austrian who first fell in love with Northland in 1973, spent decades contributing artwork to New Zealand, and gained citizenship just before his death here in 2000.

The building is expected to significantly boost tourism, particularly in Whangarei and also in Northland as a whole.

Its Maori art gallery component will be the only gallery in the country exclusively dedicated to Maori art. HAC will host original, exclusive Hundertwasser artworks gifted by Austria’s Hundertwasser Foundation.

Mr Hundertwasser lived near the Bay of Islands in his later years. His unmistakable style — flamboyant colours combined with delineated shapes representing the fluidity of natural forms — is found throughout Northland, where hundreds of letterboxes, walkways, bollards and murals are painted in a style emulating the man who came to be a local hero.

Hundertwasser-style buildings are found across the world, from Austria to Tokyo, although New Zealand currently has just one small building — the public toilets in Kawakawa.

In Whangarei, Andrew Garratt and the Prosper Northland Trust have been running the Yes! Whangarei campaign for three years,although the HAC proposal dates back to 1990.

In 2015, Whangarei’s citizens voted in a referendum to decide what to do with Whangarei’s vacant Harbour Board Building at the Town Basin marina, and whether HAC could be given the land as well as $2.8 million in Whangarei District Council funding. A large majority voted in favour of the HAC over alternative options.

Construction of the HAC will not commence until the whole $16.25 million has been raised, although the first stages of some sort of Hundertwasser construction in central Whangarei have begun.

Currently, $11.1 million has been raised thanks to grants from central government, local government, businesspeople across the country and Northland citizens drip feeding affordable donations.

The first stage of the HAC is a “folly” construction called Te Kakano. This is currently being built beside the location of the HAC, and will be a five-metre high spiral-shaped viewing platform.

Te Kakano will be built using reinforced concrete block construction, and its cladding will be adorned with tiles, black and white chequers, spheres and curved steel in Hundertwasser’s idiosyncratic style.

One of the most quintessential Hundertwasser design features was that the buildings he designed usually had roofs with a layer of soil, grass and trees — thus, Te Kakano will have a garden rooftop lookout.

“Building Te Kakano will be an opportunity for local artists, builders and craftspeople to master techniques such as mosaic required ahead of the final HAC build,” Mr Garratt says.

Construction waste under the microscope

Why don’t politicians seem to understand the relevance and impact of our industry?