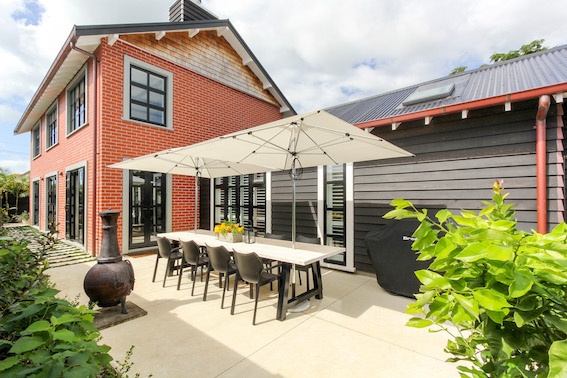 Gareth Collins of Gareth Collins Building Ltd was overwhelmed when he found out his Strandon project was named the Taranaki Registered Master Builders 2016 Supreme House of the Year, as well as being awarded a Gold Award and Category win for the Nulook New Home $650,000 – $1 million Award, and the Heart of the Home Kitchen Award.

Mr Collins said winning the award was a career highlight, and was incredibly rewarding for all those involved.

“We had the whole team at the awards, as well as the clients, and everyone was just buzzing. It’s fantastic to be recognised for your hard work,” he says.

Mr Collins says the style of the home was a stand-out feature — being built as a traditional 1940s character home — but explains the size of the site was a challenge.

“There were some amazing tiled and timber features throughout the home, both inside and out, which contributed to the traditional style of the home,” he says.

“The size of the site was limited though — we didn’t have much room to move, and we also had to deal with some foundation issues before we could progress with the build.”

Judges were impressed with the carefully designed home, which was built on a very tight and narrow site amongst other established homes.

“The home is designed with a clever interplay of space and light. The two-storey lounge space is a dominant feature which contains highlight windows, creating a dramatic effect and allowing light to flood down into the space,” they said.

“With a combination of brick veneer, cedar board and careful detailing, this home not only reflects the architecture of the neighbouring homes, but provides a home designed for comfortable living.”

Mr Collins says winning the award gives the company more recognition amongst the public and their peers.

“Winning the award creates more trust and confidence with potential clients as it shows the high standard of our work,” he says.

He praises the Registered Master Builders Association for their esteemed reputation, the support they provide to members, and the guarantee scheme.

Gareth Collins Building Ltd is looking forward to the national competition this month, and the opportunity to meet like-minded people in the construction industry.