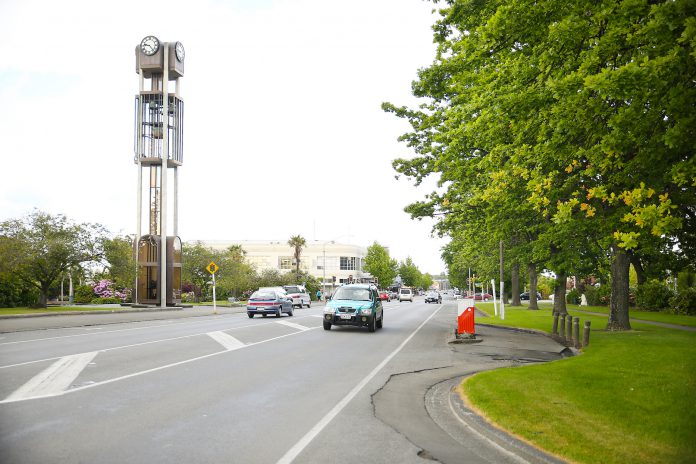 The next time you have cause to drive through Ashburton on State Highway 1 take a turn across the central rail line.

Cruise along East Street. Halfway along you will come to Baring Square East, its fountains, and the town’s impressive clock tower.

The clock has a long history in Ashburton. It started its mid-Canterbury life in 1904 housed in the tower of the old Post Office which was erected in 1901.

In the aftermath of the 1931 Hawkes Bay and 1942 Wairarapa earthquakes, the tower was removed at the direction of central government and the clock put into storage.

The 1970s saw the clock restored by the Ashburton Lions Club at the urging of Ralph Crum. The project found the club working in Mr Crum’s home workshop every Monday night for a year.

The completion coincided with a decision of the local County Council to mark the County Centennial in 1976 by erecting a suitable tower to house the clock. The Tower was designed by Warren and Mahoney Architects, the contractors were Bradford Construction Ltd, and the clock installed by Horrell Engineering.

The tower has become widely recognised as the symbol of Ashburton. In 2004, the New Zealand Institute of Architects acknowledged the significance of the Warren and Mahoney structure in presenting them with an “Enduring Architecture” award for their design based around four slender post-tensioned concrete columns. It had won an earlier NZIA Local Award in 1978.

Six years ago it became clear that the tower’s structure required a major refurbishment, including a seismic upgrade.

A comprehensive assessment was undertaken by Skews Architects. This led to a strengthening in 2011 of the top 600mm and bottom 600mm of the four concrete columns, using two layers of Sikawrap 100G glass fibre fabric.

The elevated belfry slab was also reinforced by application of Sika Carbodur S512 carbon laminate bands around all four sides of the slab, with 16 No Sika Carbodur 4/30/70 “L” plates fitted at the slab edges to provide a flexural anchorage connection between the top and bottom faces of the slab.

At the same time, Engineering Maintenance Ltd was commissioned to renovate the clock mechanism in conjunction with Trevor Cullimore, who had responsibility for the clock’s maintenance since the tower’s erection in 1976.

All in all it is well worth a visit. The surrounding gardens are superbly maintained. The fountains are fascinating, and it is worth getting there at about 10 minutes to the hour to sit in the square and watch the entire performance. Just keep upwind of those fountains.

For those who need to know, the chimes are those known as the Cambridge or Westminster Chimes, as used by Big Ben.

They are supposedly variations based on the four notes that make up the fifth and sixth measures of I know that my redeemer liveth from Handel’s Messiah.

This has never been substantiated, nor has the alleged arrangement of these notes into the chimes by Dr William Crotch in 1793.