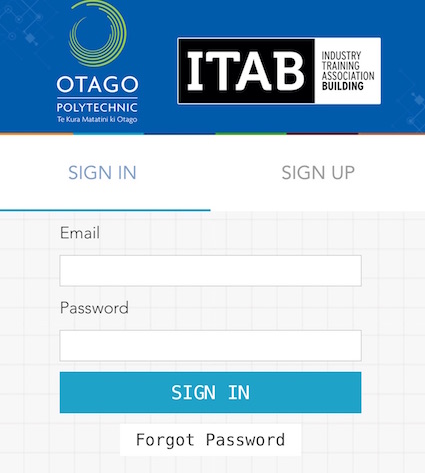 Keeping tabs on apprentice learning just got a lot easier thanks to a new app modified at Otago Polytechnic.

The Otago Polytechnic ITAB App allows apprentices to record text and photos while they work, then report directly back to their employer.

Until now, apprentices have had to laboriously complete paperwork every night — printing photos, recording what they worked on, how they worked on it and for how long.

“It’s another tool to make life easier. They can record their evidence of learning, and it’s far more accurate and quicker than trying to recall it at the end of the day,” he says.

Data from the app is stored on the Cloud. Employers have access to it at any time and can give instant feedback.

“Some employers aren’t that technically savvy. The app had to be really simple so they could access information easily.”

“It’s so much quicker and easier than filling out paperwork. It definitely saves heaps of time. I’m not very good with computers, so it was important to me that it was straightforward,” he says.

“Most of the other apprentices wish they could’ve done theirs online!”

Otago Polytechnic carpentry staff are also using the app so they can give feedback to apprentices. It also means staff are fully up to date with the apprentice’s work before they make site visits.

The app is free and available to any builder who wants to follow their apprentice’s evidence of work in a clear and accurate manner.

Mr Thompson is hoping to introduce video to make the app even easier to use.

Mega trade show is all go!

New building consent exemptions from August 2020 — what do they really mean?

Building begins for landmark University of Waikato development ‘The Pa’