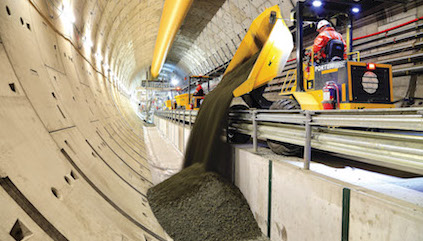 The Mackays to Pekapeka Expressway, Waterview Tunnel and Christchurch Infrastructure Rebuild are among dozens of civil contracting projects up for the industry’s equivalent of the academy awards in Dunedin.

Civil Contractors New Zealand’s (CCNZ) four-day conference starts on August 2, and the highlight for all industry attendees will be the celebration of the CCNZ National Awards 2017 held on Friday, August 4.

As its title implies, the Hirepool Construction Excellence Awards recognise excellence in the construction or maintenance of assets.

It has five categories that cover maintenance projects and new infrastructure projects ranging from less than $5 million through to over $100 million. A total of 27 projects from Whangarei to Southland are finalists.

The Expressway, Waterview Connection and Christchurch Infrastructure Rebuild are the three finalists in the over $100 million category.

Other category finalists include the new ferry pier at Auckland’s Half Moon Bay, SH3 upgrade in New Plymouth, and earthquake strengthening of Wellington’s St Mary of the Angels Church.

Hirepool sales and marketing general manager Gary Richardson says his company’s gear had helped build some of New Zealand’s largest projects over the past 60 years, including the Waterview Tunnel.

“So we’ve seen the great work that these companies do up close, and it’s a natural fit and privilege for us sponsor these Awards. The work these companies have done in all entries is a testament to the people in their teams, so well done to them all.”

Connexis interim chief executive David Worsnop says the huge investment in New Zealand’s infrastructure meant it was now more important than ever for contracting firms to attract and retain the right people.

The Z People Awards celebrate great leadership in the civil construction sector, and has two categories — the Emerging Leader Award for leaders aged 35 and under who have made a positive difference to the industry, and the Training Development Award to recognise individuals who have developed a career path. The four finalists are from Christchurch, Auckland and Waikato.

“At Z we reckon it’s the people who enable the delivery of an extraordinary future. So sponsoring the people awards at the CCNZ conference is a natural fit for us, and we are really proud to be sponsoring the Z People Awards for the 11th year running.”

CCNZ chief executive Peter Silcock says the awards are an annual highlight for the civil construction industry, and a chance to celebrate the extremely hard and dedicated work that CCNZ members undertook on every project.

“Our members create the backbone of the nation, and the awards are a way to say ‘thanks for doing a wonderful job, we really appreciate what you do for your communities’.”