Home BCITO Got a Trade? Got it Made! 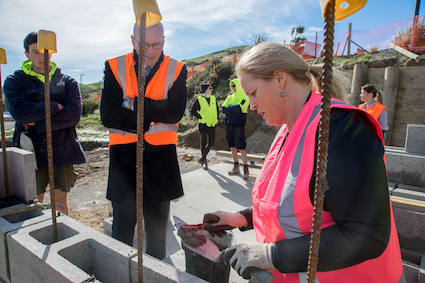 Young trainees and apprentices shared their success stories with keen young Kiwis during this year’s “Got a Trade? Got it Made!” week.

Got a Trade Week is an annual campaign that the BCITO is part of in collaboration with eight other Industry Training Organisations.

This year, the third appearance of the campaign, happened from August 21 to 25, and celebrated 148,000 apprentices and industry trainees who work every day in more than 140 trades and services.

“We want young people to know about the massive range of job opportunities that offer the chance to ‘earn and learn’,” Industry Training Federation chief executive Josh Williams says.

“You can get paid and get qualified, and launch successful careers without racking up a student loan.

“While three out of 10 school leavers go to university, 10 out of 10 will need jobs,” Mr Williams says. “The number of apprentices and industry trainees now exceeds the number of university students, and this growth is set to continue.

“Employing young people in growing industries is a win-win. Training on the job develops the right skills at the right time, and individual growth translates into the regional and economic growth the country needs,” Mr Williams says.

When it comes to a young person getting into a trade, employers are our heroes.

“Employers are now the largest provider of post-school education in New Zealand. We all benefit from their grateful time, talent and commitment to growing the next generation of skills,” Mr Williams says.

“We never forget the name of the person who first gave us a chance in our careers. Thousands of employers are out there taking on apprentices and trainees, training them up and giving them a chance. This week, we salute them too.”

As part of Got a Trade Week, the BCITO and Tertiary Education, Skills and Employment Associate Minister Louise Upston visited The Brothers Mead Bricklayers in Wellington, where the Minister traded places with an apprentice to experience what it is like to be working in the trade.

At first the Minister said, “this looks complicated!”, but was pleasantly surprised by her efforts.

BCITO Brick and Block Laying National Advisory Group chairperson Rick Mead has been training apprentices for more than 15 years, and he said having a Minister visit was a first for his team.

Minister Upston laid a row of blocks forming part of the reinforced walls of a new residential build. Josh Burridge, recently completed BCITO apprentice, said he really enjoyed showing the Minister what’s involved in his day-to-day work, although he never expected to get to show a politician with a penchant for the trades what to do.

Josh said he felt proud to show the Minister the ins-and-outs, and really enjoyed talking about the trade with her.

BCITO chief executive Warwick Quinn says it was an excellent opportunity to promote the brick and block laying trade to young career seekers and their influencers as part of Got a Trade Week.

“We’d like to thank The Brothers Mead for letting us visit, and for hosting Hon Louise Upston.

“Brick and block laying is going through a major skills shortage so there’s plenty of opportunities available right now for young people with a good attitude who enjoy working outside as part of a team.

“Minister Upston did a terrific job laying a course of blocks. This just goes to show that this is a possible career for both genders, and girls should think seriously about giving it a go,” Mr Quinn says.

“More apprenticeships” has been a catch-cry during this election campaign, with Government targets and opposition policies looking to grow the numbers of traineeships and apprenticeships.