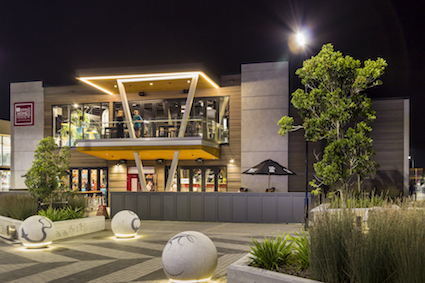 Construction of two new buildings in Stage two of The Landing have recently been completed at the new retail and mixed-use centre in Christchurch’s Wigram Skies community.

The latest section of the project includes the addition of The Good Home Bar to the existing town square dining precinct, and a generous retail and office space housing tenants such as Hells Pizza and Smarty Pants amongst others located on The Runway, The Landing’s main thoroughfare.

Once completed, Stage two will boast a 3509sq m site area, including 1800sq m of retail, 600sq m of office space, and 451sq m of hospitality spread across three buildings.

The Buchan Group was appointed by Ngai Tahu Property Ltd in June 2010 to design key components of The Landing’s retail and office buildings.

The precinct will be home to retail, dining, commercial and community facilities in a high street-style environment.

Built around a town square, The Landing will cost around $20 million, and will act as a social and economic drawcard to Wigram Skies’ master planned community south-west of Christchurch. Stage One was completed in mid-2015.

The Buchan Group, in conjunction with Kamo Marsh Landscape Architects, has designed The Landing’s two significant features — the public town square and The Runway, a high street featuring a continuous, “folded” roof.

The Buchan Group associate Gavin Gillson says The Landing would be brought to life with a design that would encourage visitors to take time out, relax and appreciate their surroundings.

“The centrepiece of The Landing is the town square, and restaurants and cafes that spill out into this common area, creating a piazza-like environment,” he says.

“Complementing the Stage One environment, The Good Home Bar provides an additional dining location for visitors.

“The Landing incorporates many soft and hard landscaping elements, which are both traffic and pedestrian-friendly, enhancing the area’s access and urban appeal.

“In particular, The Runway’s varying roof height adds depth and elevation to the area, providing shoppers with a distinct space that is visually appealing and user-friendly.

“Practical and environmental factors, including protection from the elements, has also been incorporated into the design of bus stops and bicycle paths.

“This has been complemented by sufficient and well-placed car parking in the northern and southern precincts.

“The addition of an award-winning medical centre to the master plan has strengthened the community offering as a one-stop shop destination for locals.”

The project is due for completion by 2018, by which time close to 1800 homes and 4000 residents will call Wigram Skies home.