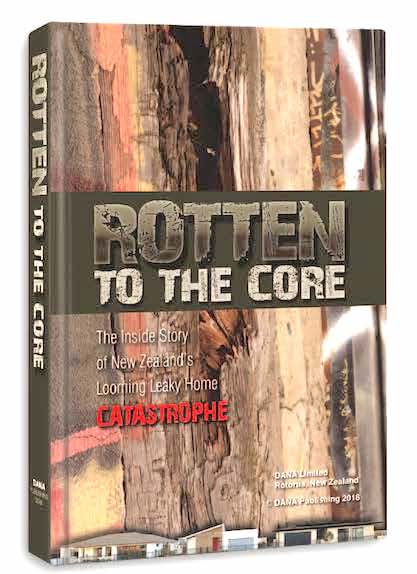 A new 240-page publication, Rotten to the Core: The Inside Story of New Zealand’s Looming Leaky Home Catastrophe, claims that New Zealand has not learnt its lesson from what it calls the “leaky home catastrophe”.

This review is the result of several months of research and interviews in 2017 by DANA director Dennis Neilson, and DANA associates, and included amassing and analysing more than 3000 pages of documentation, and interviewing more than 100 sources familiar with the saga.

DANA has identified that this is by far the most shameful episode in New Zealand political history.

The review says the “leaky homes”, or more accurately called the “rotting timber homes” catastrophe, may well end up costing New Zealand home owners more than $50 billion, and even up to $100 billion.

It says most of these costs were avoidable, if only a few decision makers had bothered to do some basic research, or had even used their common sense in the mid-1990s and after.

More than 90 years ago, the New Zealand Forest Service (NZFS) stated that houses built of timber cut from the then new plantation wood species radiata pine would have to be treated to prevent it rotting if it got wet.

A major national inquiry into wood treatment in 1952 concluded that treatment of radiata pine framing timber with boron should be mandatory, and it was for an unbroken spell of more than 40 years until 1995.

During that period there were no measurable house timber failures caused by decay.

But then the wheels fell off, the review says, as from 1991 to 1995 a four-year propaganda campaign was waged by some wood processing/treating companies to reverse more than 40 years of providing safe housing timber.

New timber treatment standards were introduced in 1995 which allowed the use of untreated radiata pine timber in houses.

This was in spite of several meetings and seminars from 1991 to 1995, at which internationally-renowned timber scientists and timber treatment specialists pleaded with the industry and government not to take this step.

Mr Neilson says that, inexplicably, the government either fell for this propaganda — or was part of the conspiracy — in spite of the by then 70 years of overwhelming written and obvious practical evidence that treatment of radiata  pine timber for houses was essential to prevent decay.

He says all their pleas were ignored or, worse, totally discredited. The move all but guaranteed that tens and probably hundreds of thousands of people would suffer terribly as a result of their houses rotting around them, as this new-fangled untreated radiata pine timber and water mingled in their houses to cause havoc and destruction.

Then it got even worse, as successive politicians added their weight to the then minor crisis, to ensure it became a major crisis — and then on to the catastrophe that it is rapidly becoming.

“Almost 400,000 houses ended up with all or partially untreated timber house framing in them, until the standards were finally changed back in 2011. All are at heightened risk of their timber rotting at some stage — if it has not already,” Mr Neilson says.

“Even as rotten homes were a feature of the landscape by 2004, major companies and associations, government departments and politicians (right to the top), all fought tooth and nail against a move back to treated timber, and/or shamed anyone who suggested rotting homes were, by then, a serious problem.

“Fast forward to 2018, when a new National Flower has been identified — the white plastic shrink-wrapped ‘tents’ which have ‘bloomed’ all over the country covering rotting timber houses being rebuilt — or, increasingly, demolished.”

And in 2018 industry and government appear to want to yet again inflict upon home owners radiata pine timber that could well be more than 40% and, in some cases, more than 50% untreated,” Mr Neilson says.

“No. It appears that New Zealand has not learnt its lesson.”

To order a copy of Rotten to the Core: The Inside Story of New Zealand’s Looming Leaky Home Catastrophe, visit www.dana.co.nz or contact info@dana.co.nz.