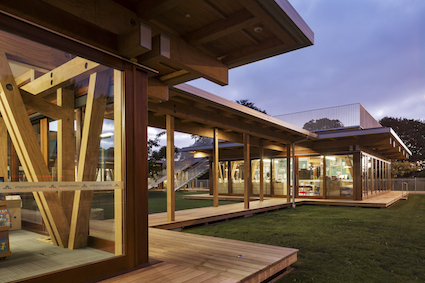 Cathedral Grammar Junior School might look simple, but it’s not. The school, described by judges as “a showpiece of timber architecture and craftsmanship” took out the Value Award $2 million to $5 million category at the 2017 New Zealand Commercial Project Awards.

“The structure looks really simple and elegant, but in terms of construction elements, it’s actually quite complex,” says Peter van Eekelen, a director of Contract Holdings Ltd whose company built the project.

“It’s the opposite of what most things are — it’s a complex structure that looks simple.”

These unique design features presented some challenges for the team.

“We are experienced in timber construction work, so we had a good idea about the right approach. But sometimes it’s easy to draw a detail, and it’s not so easy to deliver that detail in terms of a construction element,” Mr van Eekelen says.

“We modelled a number of elements to show that while it can be drawn, it can not necessarily be built with ease, and we ended up resolving a number of construction processes without compromising the design.”

Mr van Eekelen says the project was delivered in a very tight time frame, and its success came down to teamwork and collaboration.

“Between our team and the consulting team, there was a genuine partnership working on the delivery. We all have different skill sets and everybody worked together.

“It was a special project, and it’s one that we put a fair amount of heart into,” he says.

The result is a phenomenal achievement. The building’s structural elements are also the ﬁnished linings and ceilings. 3D modelling ensured the interlocking timber components all ﬁtted when assembled on site, after being manufactured in Auckland and transported to Christchurch.

The school is characterised by the extensive use of timber, giving the spaces warmth and character.

Mr van Eekelen says it does its job perfectly as a school, but the design really shines at night.

“When it’s got the lights on at night you get the warmth of the timber. When I drive past it at night, I smile. It’s really cool.”

Mr van Eekelen gives his team full credit for completing the project to the highest standard under a tight deadline.

“In November we were two months behind, but it didn’t make any difference as we were committed to meeting the deadline of February 22.

“The kids were walking into school on that day, and I made the commitment that it would be operational,” he says.

The team hit the deadline — just. “As they were doing the traditional Maori opening at the front end of the building, our cleaners were walking out the back.”

He values the Registered Master Builders Association for the strong lobbying voice it provides for the industry.