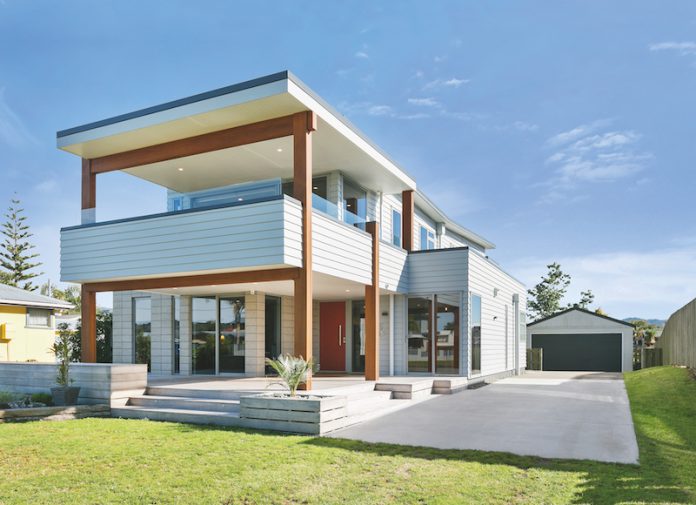 The total makeover of a small Whangamata seaside bach into a spacious two-storey family retreat resulted in a win for John Mourits Builder at the 2017 Registered Master Builders House of the Year Awards.

The home took out the Master Build Services Renovation up to $500,000 category at the national competition.

Mr Mourits says it was an awesome feeling to win the award for the property he built for his clients, who were his brother and sister-in-law.

He says the renovation was on an existing site, and was well suited to what the couple wanted — a decent-sized beach home with living areas so you could accommodate extended family.

“They love having the family come to the beach,” he says. “It’s been designed so that the grandchildren can run around downstairs while the adults can relax upstairs.”

Mr Mourits says the home is designed to be strong, and so that all the elements blend in together.

“It was just a simple 80sq m building downstairs, and we’ve built on top of the whole thing,” he says.

“The original build wasn’t designed to carry the whole load, so it has a lot of structural steel inside that you can’t see. There is a lot of structure which supports the top, but we concealed this in the building or wrapped it in cedar timber so they look like cedar posts.”

Due to the location of the property, Mr Mourits, his brother, who is also a builder by trade, and two staff, lived on site for the build.

“This was challenging and interesting at times,” Mr Mourits says.

“Because we were building a whole new upstairs, we had to take the roof off. We were living under truck covers and it rained. At the time it was frustrating, but you look back now and laugh at it.”

The judges said the new home is a credit to the builder and home owner, and has been excellently designed, constructed and renovated to a very high standard.

Mr Mourits has been a Registered Master Builder for more than 15 years, and this is his second entry — and his second success — at the House of the Year Awards, having won a regional award in the same category in a previous competition.

This is the team’s first national House of the Year win.

He says he would enter the competition again when the right project comes along, and he encourages other builders to consider entering.

“It’s a great way to build your reputation and credibility in the industry.”

House of the Year is made possible through the support of PlaceMakers, Master Build Services, GIB, Nulook, CARTERS, Plumbing World, Resene and Bunnings Trade.