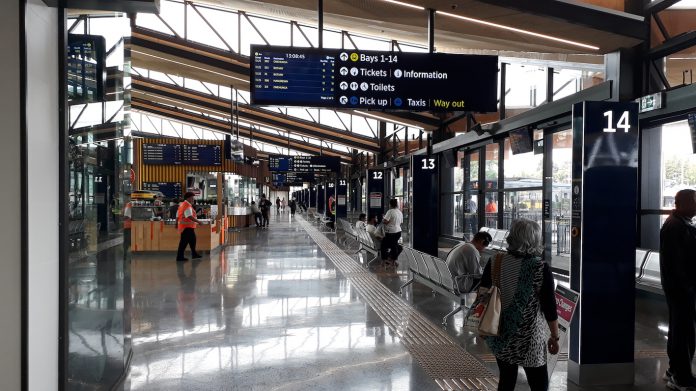 The Manukau Bus Station has been open for just over a month and has already won a prestigious architecture award.

The new station was the sole winner in the Public Architecture category at the Auckland Architecture Awards held recently.

Auckland Transport chief infrastructure officer Greg Edmonds says AT’s continued partnership with Mana Whenua was an important component in the design and construction of the station.

“In addition to the use of natural timber and prominent Iwi creative expressions, Te Aranga Maori Principles guided the design of the vital stormwater management system and the passive temperate controls methods.”

The Auckland Architecture Awards are part of a programme run by the New Zealand Institute of Architects (NZIA). The programme sets the benchmark for the country’s buildings, and recognises the contribution of architects to their towns and communities.

Rick Pearson, this year’s awards jury convenor, says infrastructural projects, such as the Manukau Bus Station, where culture and function are integrated so that the architecture is meaningful as well as cleverly planned, impress the judges.

“From the metaphor of a kite has been created a lovely, light floating structure.”

The project was designed by Beca Architects and Cox Davies.

Auckland Mayor Phil Goff, along with Transport Minister Phil Twyford and the Otara-Papatoetoe Local Board, opened the $49 million bus station in April.

It represents a significant investment in a joined up public transport system for Auckland, making it easier for people to switch between bus and rail, and to get around the city without adding to road congestion.

Visit at.govt.nz/manukaustation to find out more about the project, and to watch the time lapsed and drone footage of the construction.