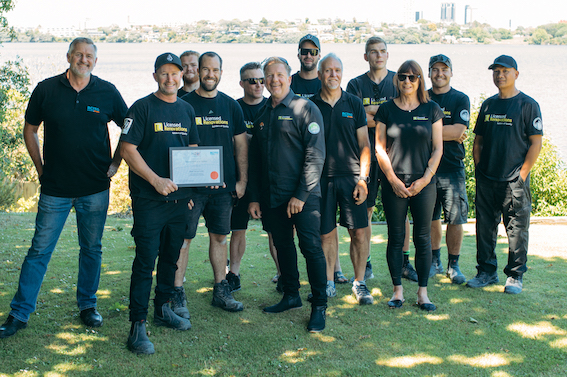 A building site is a noisy workplace, but not for Mark Siviter at Licensed Renovations in Auckland.

Recently qualified carpenter Mark has hearing loss, but that hasn’t stopped him achieving his goals and completing his BCITO apprenticeship.

Mark’s employer, Licensed Renovations director Russell Clark, says it was a full-on challenge, but an extremely rewarding thing to help Mark complete his apprenticeship, not just professionally, but for him personally as well.

“Many strengths can be derived from adversity, and Mark’s strengths are highly valued in our team. In New Zealand, there are around 9000 deaf people and around 24,000 people who can sign. You can probably count on one hand the number of deaf carpentry apprentices there have been,” Mr Clark says.

Mark grew up in Blockhouse Bay and went to Kelston Boys High School. He says he got up to the usual antics, “as you do at school”.

When he left school, Mark first worked as a shopfitter for nine years, and says the best thing about that job was that he got to travel nationally and internationally.

Outside of work, Mark is into touch rugby, fishing and rugby union. He says a typical workday starts with snoozing the alarm at least twice, even though he’s real keen to get stuck into it.

Mr Clark first met Mark by chance when he was doing some work for the Deaf Society. At the same time, Mark had a mate who was doing an apprenticeship and enjoying it, so Mark knew this was a good opportunity when Mr Clark offered to hire him.

“I’ve been at Licensed Renovations for three and a half years now, and what I like most about the trade is making something from nothing and standing back and looking at what we’ve created when it’s finished,” Mark says, adding that his favourite tool is the hammer.

“My boss has been extremely encouraging, and some of the team have learnt to sign which helps us communicate in the workplace.

“The team culture is very inclusive, and there’s a lot of banter that goes on at work. It’s really important to have a bit of fun because then you enjoy your job and it helps the team bond.

“Now I’m qualified, I’d like to focus on gaining more experience and increasing my skills.”

When asked if there were any challenges to overcome throughout his training, Mark says New Zealand Sign Language (NZSL) is grammatically very different to English, so that was a challenge initially.

“But then I got the right team on board to help me out — an NZSL interpreter and the BCITO were helpful with literacy and numeracy too.

Mark has some top tips for newbies. “To new apprentices, I say find a good buddy builder to team up with and take advantage of their experience and skill.

“Use your BCITO resources to look up a particular part of the job you’re working on — that’s what they’re there for, and they’re a huge help.

“Oh, and don’t forget to take loads of photos of the work you’ve done to use as evidence and to talk about at assessment time.

Mr Clark and the team at Licensed Renovations are a clear sign that diversity can benefit everyone in the team, as well as the business as a whole.

Mark’s feeling pretty proud of himself for achieving his qualification.

“It’s a huge relief that it’s done, but I couldn’t have got past the goal post without such a great team supporting me all the way to the touchline.”