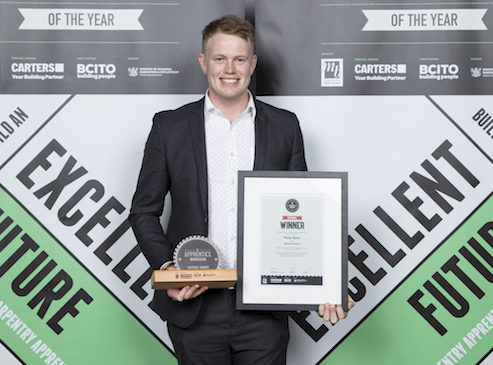 The 26-year-old, employed by Armitage Williams Construction Ltd, says he was in disbelief when he found out he had won, but was very happy with his achievement.

“I was really nervous throughout the event, and I also felt pressure to live up to the high standards I put on myself. But, overall, it turned out to be an amazing experience,” he says.

“I competed in the regional competition last year, and I wasn’t sure if I should give it another go, but my employers were really encouraging and said I should put myself out there. I’m so glad I did!”

Peter says the most enjoyable part of the competition was getting to know the other competitors.

“I really enjoyed building a friendship with the other finalists. It was great to spend time with a group of apprentices at the top of their game. We all wanted to do well at the event, which meant I could get along and relate with all of them.”

As part of the national competition, the 10 finalists had to complete a six-hour practical challenge, which Peter says was the hardest part of the competition.

The apprentices were tasked with building garden stations, which were donated to local schools.

“It wasn’t so much the task that was the challenge, but the nerves that came with it,” Peter says.

“You didn’t have a lot of time, and you couldn’t afford to make many mistakes. You were definitely up against it! But I was happy with how my garden station turned out.”

Judges called Peter an outstanding all-rounder, who gave a solid performance throughout the competition.

“To be successful in this industry, you must be an all-rounder. Peter demonstrated high competency across all aspects of the competition,” they said.

“He shows maturity and passion for his craft, with a clear vision to be an industry leader. His professional demeanour is admirable, and he is a worthy winner of the 2018 Apprentice of the Year.”

However, Peter’s career so far hasn’t all been plain sailing, having switched career paths after struggling to find work with his degree in fine arts.

“After university I was looking for a job in set design, but employers kept telling me I didn’t have the right skills. So, I decided to do a carpentry apprenticeship. My brother had done one himself, and told me it provided a great set of skills.

“I obviously have the skills now, so I could try again to find a job in set design, but I am enjoying carpentry so much that I think I’m here to stay!”

Peter says his apprenticeship was crucial to his success in the competition.

“The knowledge I have accumulated over the past three years at Armitage Williams Construction has been invaluable.

“They have an older workforce who have mentored me and taught me a range of interesting techniques. I picked them up quite quickly and applied them at the national competition.”

Peter says the win has helped him stand out in his company as a possible leader.

“Because I put myself out there, they’re bringing up the possibility of a leadership role within the company, which is amazing.”

He says he learned a lot from the experience, and encourages other apprentices to enter.

“You learn a lot, gain confidence, and really put yourself out there. Even though there is a lot of pressure, that does positive things for you as well.”

As well as the title of Registered Master Builders CARTERS 2018 Apprentice of the Year, Peter won the use of a brand new XLT Ford Ranger, courtesy of CARTERS, for one year, a $5000 CARTERS Business Tools Grant, an Apple iPad worth $1000 from the Ministry of Business Innovation and Employment (MBIE), and tickets and accommodation to attend the Registered Master Builders House of the Year gala dinner held in Auckland recently.

Apprentices, employers and young people aspiring to be part of the construction industry are also encouraged to join the Registered Master Builders Facebook page at
www.facebook.com/registeredmasterbuilders.

The Registered Master Builders Apprentice of the Year competition is made possible thanks to principal sponsor CARTERS, the Building and Construction Industry Training Organisation (BCITO), and supporting sponsor the MBIE.