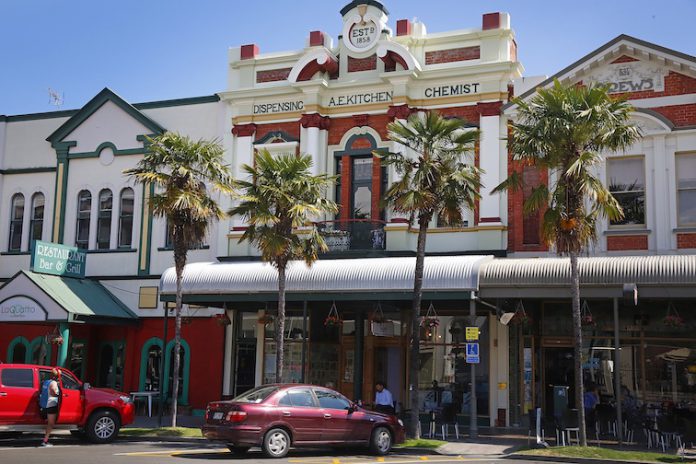 By Elizabeth Bush-King, Ministry for Culture and Heritage

Since then, $4.9 million of funding has been allocated to projects across the country.

Since its launch in 2016, the scheme has supported almost 30 upgrade projects.

Getting funding to regional centres is especially important, as seismic strengthening can be expensive. Owners in regional areas face a range of unique challenges, but the most pressing are lower building rents and values that often don’t justify the upgrade expense, and a shortage of locally available professional advice.

“One of the problems that keeps coming up when we talk to building owners in smaller towns is the difficulty they’re having finding the right professionals to do the work,” Heritage EQUIP fund manager Mike Frew says.

“This could be organising a structural engineer, or finding an architect with good heritage experience. To help address this situation, we’ve created new Professional Advice Grants for building owners in regional, medium and high seismic risk areas, who are right at the beginning of the upgrade process.

“These grants can be used to obtain detailed seismic assessments, or architectural or seismic design advice.

In addition, consultants, councils and heritage trusts are encouraged to bring building owners together and co-ordinate advice and upgrade projects for multiple buildings.

The Ministry hopes that by combining efforts to find project scale, advice and works costs will decrease.

The Ministry is also trialling a partnership approach with a small number of councils, with the aim of supporting their work with building owners.

Building owners, councils and consultants interested in applying for funding can email heritage.equip@mch.govt.nz, or call 04 499 4229 and ask for the Heritage EQUIP team.

Applications are assessed three times a year. Full information about how to apply is available at www.heritageequip.govt.nz.

The A E Kitchen building is a commercial heritage building located on Victoria Avenue, right in the heart of Whanganui. Its Edwardian Baroque style makes it a feature of the city’s streetscape.

Owner Kerry Girdwood undertook a major project to restore and strengthen the building, and now lives in the upper floor apartment, while two shops occupy the ground floor.

Whanganui-based Registered Master Builder DML Construction was appointed as the lead building contractor for the project.

Owner Keryn Amon and project manager Paul Chapman say the A E Kitchen building has been one of the most rewarding projects they’ve worked on.

“Kerry’s plans were bold, but they definitely paid off, and it’s been a real success story.

“The building is special because of its history and stunning facade, but this project meant we were also able to create a special home for the owner,” Mr Amon says.

“It was a pleasure to work directly with Kerry, Bruce Dickson the architect, and structural and seismic engineers EQ Struc, because nothing was prescribed — the project had a genuine collegial atmosphere.

“As project managers, we were also able to implement best practice value management, which helped to keep costs down.

“Seeing the joy on Kerry’s face when the restoration was complete was a highlight,” Mr Chapman says.

“She wanted a safe, secure, inner-city environment to live in, and she has it, along with two commercial tenancies.”

The superb quality of the restoration is such that it won a silver award in the Heritage and Restoration category of the 2018 New Zealand Commercial Project Awards.

This included strengthening of the perimeter masonry walls and parapets, and for the connections between the roof and walls.

She worked with her structural engineers to adapt their original strengthening design, which she thought was too intrusive and didn’t factor in the resilience of native timber floors.

The final stage of the strengthening project was to strengthen the ornate facade. When scaffolding went up outside, she got an unpleasant surprise.

On closer inspection, it was more fragile than initially thought, and more work was needed to strengthen it, meaning the budget for the facade had to be tripled. Funding from Heritage EQUIP helped her complete the job.

One of the major challenges the owner and DML Construction faced was time. Originally, the entire project was expected to take between four and six months, but it eventually took more than a year.

“The access to the site was another big challenge,” Mr Chapman says.

“It’s a very narrow building, only eight metres wide, with a party wall on one side, and the other neighbouring wall very close by.

“We had to bring in heavy, bulky steel and install new foundations, for example, all in a very confined space. Everything had to be done inside the building — there was no room to bring in a crane!”

On top of that, a team of five or six builders would be on-site each day, along with various other trades, since all the building’s systems, including heating, water and electrics, were modernised.

“A real feather in the cap for us was having a good working relationship with the local council and the designer, which meant the final product suited the mixed-use nature of the building.

“For example, we were able to install new accessible toilets in the middle of the building, so that the owners and the commercial tenants could share access.

Despite the challenges, Ms Girdwood doesn’t regret doing the very best by the building, and recommends Heritage EQUIP to other owners of heritage buildings.

“I’d say to other building owners, do it. You will have to do it soon anyway, and I understand the queue for seismic assessments and structural design is lengthening,” she says.

“Don’t be put off by the thought it’s going to be expensive. It’s less expensive than it might otherwise be if you have Heritage EQUIP help.”

Restructures and redundancies on the rise for businesses