Home Columns Building Blog Your personal Shangri La — what would it look like? 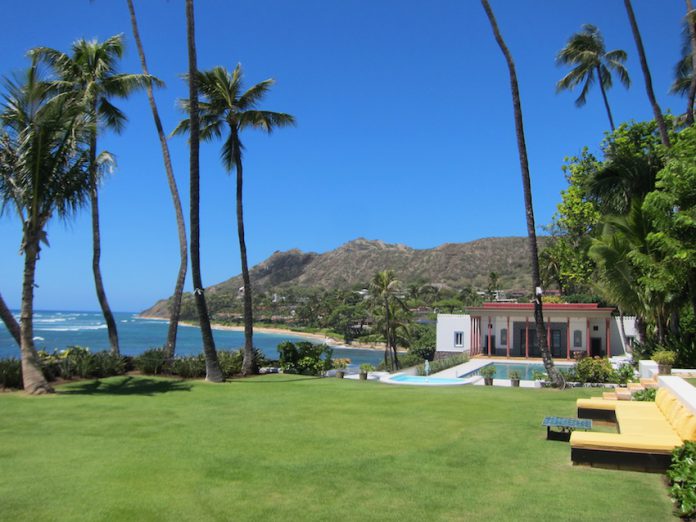 If you had an unlimited budget for your dream home would you be more likely to aim for the audacity of Frank Lloyd Wright’s Falling Water, or perhaps the elegant simplicity of Mies Van Der Rohe’s Farnsworth House, or instead the sophistication of Le Corbusier’s Villa Savoye?

For tobacco heiress Doris Duke, the trigger was a honeymoon visit to the Taj Mahal in Agra, followed by a growing obsession with Islamic and Eastern art and architecture.

This was followed by an instant attraction to the tranquillity of 1930s Hawaii. Her marriage failed to survive the decade, but her love affair with Hawaii continued until her death in 1993.

By the turn of the 19th/20th Century, his company American Tobacco controlled more than 90% of the American cigarette market.

Fortunately for the future health of Europe, he failed to gain similar control over the British market.

His parallel interest in developing hydro power schemes came not from any desire to help the environment, but from a need to supply cheap power to his growing number of cotton mills.

To answer for at least some of his sins in his choice of business, in 1924 he established the Duke Endowment, with some US$572 million (today’s values). On his death, a further US$936 million was added.

Among the major beneficiaries was Duke University in North Carolina.

While he married twice he produced only one daughter, Doris, heir to his remaining estate in 1925 of more than US$1 billion, at the age of only 12.

She was described in the newspapers at the time as the richest little girl in America.

During a six-month honeymoon and what later proved to be a brief marriage to James Cromwell, Doris Duke purchased some five acres (two hectares) of coastal land on Oahu, to the east of Diamond Head.

She proceeded to lay down the foundations of what became her dream home, Shangri La. The name came from her love of American movies, specifically James Hilton’s Lost Horizons, which evoked a paradise on earth, a secret place.

This was very much in line with Doris Duke’s personal inclinations. She was, outside her small circle of close friends, an intensely private person.

She also followed her father’s stern dictum of trust no one, and took a personal interest in every aspect of her new home’s development.

Doris Duke was only 22 years old when she first envisioned Shangri La in 1935. She travelled to eastern destinations such as Egypt, India, Indonesia and China, and was fascinated by the rich cultural traditions, particularly Islamic ones.

She intended to collect works of art and ideas for the Florida home she and her husband planned to occupy.

This original idea faded with her marriage and her growing attraction to the Hawaiian lifestyle and culture.

During her early years in Oahu she became friends with the famous surfer Duke Kahanamoku and his five brothers, who all became close friends and took a friendly interest in the construction of the Shangri La estate.

The architects were Wyeth and King, and the project architect was Marion Sims Wyeth. They were instructed to more or less copy the Hispano-Moresque style of Palm Beach.

However, during and after the initial construction phase, the building became a reflection of the stunning setting and the changes made to accommodate Doris Duke’s growing collection of Islamic artefacts.

The final plans were approved in February 1937, and up to 150 workers were involved in the construction of a new sea wall and boat harbour, the long entrance drive and then the building itself.

The cost of the project was US$1.4 million, an enormous amount at that time. The home was essentially completed by Christmas 1938, and her husband moved out in 1940.

The form of Shangri La

The approach to the house is down a long driveway through heavy tropical planting, ending in a courtyard with a large Banyan tree at its centre.

The design of Shangri La is an idiosyncratic blend of styles. The entrance wall of the house is plain to the point of insignificance, with a simple door set in an unadorned plastered wall.

Only the smiling camels either side of the entry indicate that this is the proper mode of entry, and provide a hint of the Eastern promise of the interior; and more significantly its stunning contents.

The home is very much an understated backdrop to what it contains and displays.

The main house is set on one plane, but with a number of stepped levels following the contours of the site. The main spaces are set around an internal courtyard in the Persian style.

From the entry foyer the house layout is not obvious, leading the visitor through a series of steps and turns, slowly revealing the main public spaces — the Syrian Room, Turkish Rooms, Mihrab Room, Library, Dining Room and Lanai, and finally the Living Room. The owner’s private rooms are contained in a separate wing accessed through a single door.

Guests, whether staying or visiting for the day, are accommodated in a separate pavilion known as the Playhouse, at the far end of the main garden and swimming pool area.

The swimming pool is 25 metres long and deep enough for a high diving board (since removed).

The building has a private living room and two guest suites. Nearby, beyond the private Mughal Garden, is a tennis court and a caretaker’s cottage.

The views from the main house, particularly from the Dining Room Lanai, Living Room and lawned garden are spectacular, revealing the typically Hawaiian blue sea and a seldom seen view of the back of the famous Oahu landmark, Diamond Head.

However you might imagine Shangri La should look, this must come close.

A critic once described the residence rather cruelly as far smaller than the sum of its parts, representing nothing more than ostentatious spending.

What Duke attempted for herself was to immerse herself in beauty. What she created is a confection that defies cultural specificity.

While Islamic in style it is evocative of times long past and distant lands — more atmospheric than artistic.

The interior layout of Shangri La is asymmetrical, with no clear axis. You are confronted by sudden changes of direction and short flights of stairs, while your eye is distracted by brightly coloured Iznic tiles from Turkey and textiles and furniture from India, Central Asia, Iran and Syria.

However, the house follows three main principles. It is essentially a single storey, ensuring that its bulk does not overwhelm the strong, natural forms surrounding it.

The rooms and wings of the house radiate around an interior central courtyard, ensuring that all the main rooms have a view of the ocean.

Thirdly, the house, including the pool house, follows the orientation of the coastline, connecting key areas of the property to its locale and the ocean views beyond.

The house is also a home of technical marvels. The front wall of the living room descends into the ground on a system devised by the Otis Elevator company.

This provides a dynamic blending of interior and exterior spaces, echoed in the open porch fronting the pool house, inspired by Doris Duke’s visit to the Chihil Sutun Royal Pavilion in Isfahan.

Another innovation is the use of sliding jahils, the lattice-carved screens Duke commissioned in India.

However, these screens are unique in that they and the glass doors behind them disappear into wall cavities to provide a seamless connection between Duke’s private rooms and the garden.

The house remained a work in progress during Duke’s lifetime, with often radical changes needed to accommodate her latest purchases.

In the 1980s, Duke acquired a mid-19th Century room interior from Syria, composed of carved and painted wood panels, doors and niches.

The room belonged to the home of an aristocratic family that had resided in Damascus for seven centuries. This was only installed after some significant structural alterations, and now forms what are known as the Turkish and Baby Turkish rooms.

Because of the amount of wood panelling, the house relies on natural ventilation, as air conditioning would dry out the ancient timbers.

While elements of the main house and pool house are appealing, they are deliberately kept low key in form and lack of colour, allowing the dazzling contents and the surrounding landscape to shine.

The Duke Estate is all about Doris Duke’s love of Eastern art and the natural beauty of Hawaii. The result is a reflection of a woman of strong and clear views on her place in the world, allowed for by her wealth, but also a tribute to her good taste and somewhat flamboyant approach to life and art.