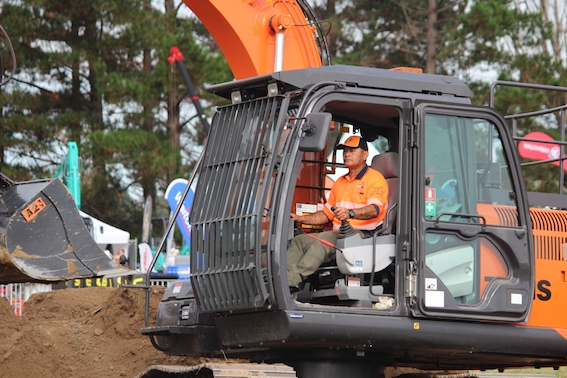 Riki Lum was named the winner of the National Excavator Operator Competition following two days of intense competition against the country’s top excavator operators at the Central Districts Field Days in Feilding recently.

Mr Lum, from Kiripaka in Whangarei, and works as an excavator operator for Northland-based civil construction company Clements Contractors. He is a father of five and grandfather of nine.

He thanked the competition judges and officials for inspiring him to improve his skills over the past year, particularly James Lux, the 2013 competition champion who now sets and judges the One-Day Job Challenge — a technical challenge Mr Lum had struggled with in the previous year’s competition.

“James, you made me step my game up. Last year I had the skills on the course, but I had nothing in the One-Day Job,” Mr Lum said.

He came back to win this year’s One-Day Job challenge by more than 20 percentage points above his nearest rival in the challenge, which earned him the coveted One-Day Job Cup in addition to the national title.

Organised by Civil Contractors New Zealand (CCNZ), the competition saw the 10 regional champion excavator operators navigate a two-day long course to test their skills against one another using Hitachi excavators.

Jim Beamsley of Central Demolition in Palmerston North took second place in the competition with a consistent all-round performance, while Josh Keane of SouthRoads in Otago took third. Each took home a significant prize pack.

CCNZ chief executive Peter Silcock congratulated Mr Lum on his victory. He said many of the competition events had been extremely close, often with less than a percentage point separating second from fifth, and that all the competitors should be proud of themselves.

“A lot of work goes on behind the scenes to deliver a successful competition. The commitment of the Manawatu Branch has helped the competition to grow and evolve over time. It’s just getting better as time goes on.”

State-of-the-art Hitachi excavators for the Regional Excavator Operator Competition were provided by CablePrice.

Major competition sponsors Humes, FirstGas and Contractor Magazine have been sponsoring the competition for 25 years, and were celebrated at the awards dinner.

A mini-dig for children was operated by the Doug the Digger Roadshow, giving around 400 children a feel for what it’s like to operate an excavator, and raising more than $500 for the Child Cancer Foundation.