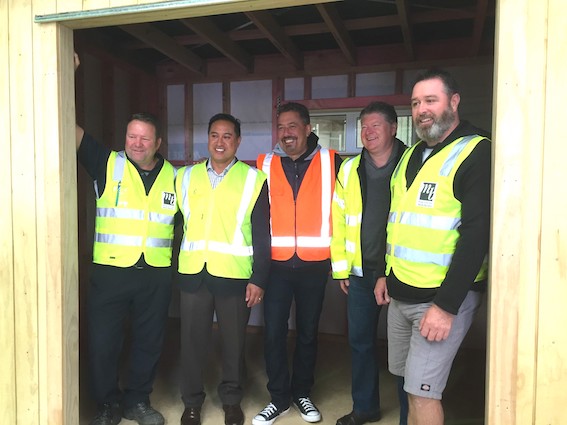 Registered Master Builders Association members were again integral to the nationwide promotion of the recent Men’s Health Week (MHW) held on June 10 to 16 this year.

The Registered Master Builders Association has been the longest and strongest supporters of MHW in New Zealand.

Every year, MHW focuses on a specific male health issue; this year it was mental health.

Auckland RMB member Kevin Everett joined TV celebrity and MHW Ambassador Mark Sainsbury to outline what MHW is all about to Mel and Holly on TV1’s The Cafe in June.

A major topic of the programme centred on recent research showing that men in the building industry have the highest rates for mental health issues of any industry in New Zealand.

Members from the RMBA’s Auckland branch also supervised the building of a shed by a group of student/trainee builders at the NZMA Campus in Mt Wellington.

The shed was to be auctioned, with the funds raised going to Mike King’s Key To Life Trust which speaks to groups and schools about suicide awareness and prevention.

The students loved the experience, bonded together as a team, listened and learned — and even started arriving for work early because they enjoyed it so much!

They found it a great experience being able to gain an insight into what life is like working in the industry.

Chief executive David Kelly says the RMBA places the health and well-being of members and all construction sector workers right at the top of its priorities.

“In an industry that is made up predominantly of males, we need to ensure we look after our health on an ongoing basis,” Mr Kelly says.

“It’s not good enough to wait until something goes wrong — so much of what can go wrong can be prevented, and prevention really is just common sense. A construction workforce in good health results in a better-built New Zealand!”