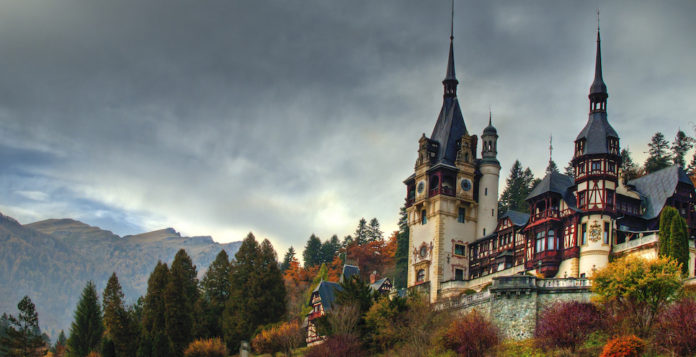 It might be hard to imagine what Vlad Peles — also known also as Vlad Dracul (devil) and Vlad The Impaler — has to do with innovation; although he did earn his title from his innovative habit of impaling captured enemies’ heads on spikes.

As one does if you want a reputation as the scary and ruthless ruler of Transylvania.

Vlad, who ruled off and on from 1448 to 1476 — he faced a few defeats along the way — did not move to Transylvania until 1475, but it makes a better story to connect him to Transylvania rather than the more boring sounding Wallachia.

Although the tourist books and later movies won’t admit it, Vlad’s “castle” was the now ruined Poienari Citadel, strategically located on the pass linking Transylvania with Wallachia, and not the more photogenic Bran Castle.

The Citadel was extended by captured Turkish soldiers that Vlad decided were too useful to stick on a spike.

The local B&B, the Pensiunea Dracula, is worth a visit as the owners are right into the Dracula theme.

King Carol I was the first recognised King of Romania, reigning from 1881 to 1914, which overlaps in time with the writing of Bram Stoker’s Dracula novel.

King Carol was a more benign and certainly much less powerful ruler than Vlad, but he did believe in making a statement and in using the very latest technologies to do so.

King Carol’s Peles Castle near Sinaia was envisaged in 1875 as a summer residence for future kings of Romania. It was finally completed and inaugurated in 1883 during the reign of Carol I.

The architects were Johannes Schultz and Karol Liman. The location was a strategic one near the then Romanian border with the Austro-Hungarian Empire.

After the unification of Transylvania with the old kingdom, the castle is now in the heart of the new country of Romania.

The castle is a mass of fairy-tale turrets, vertiginous galleries, secret passages and classical statuary. The building contains 160 rooms, and the central tower measures 66 metres in height.

The castle’s fairy-tale appearance belies the many modern innovations incorporated into the structure, including, as early as 1883, a central heating system and the castle’s own power plant, enabling the castle to become the first building in Europe to be fully electrified.

The 60-seat theatre has a mobile glass ceiling driven by an electric motor.

The interior of the castle has been used in numerous European and American films, although the Dracula films used nearby Bran Castle on the border of Transylvania and Wallachia; now touted by Romanian tourism incorrectly as the former home of Vlad the Impaler. Vlad never visited Bran Castle, and was long dead when Peles Castle was built.

In 1948, Peles Castle was confiscated by the state. It was said that the notorious dictator Nicolae Ceausescu wanted to transform the castle into a residence.

This was saved from Ceausescu’s mania for demolition and rebuilding in neoclassical style by the curators spreading the rumour that the castle contained a wood fungus harmful to humans.

If only we could have been this innovative in saving some of our own long-lost buildings?

The Palace of Parliament in Bucharest, built for Nicolae Ceausescu and his just as notorious wife and partner in crime, is the world’s second-largest administrative building after The Pentagon.

Its bloated and downright ugly bulk, containing 3000 rooms and covering some 330,000 square metres, shows what fate might have held for Peles Castle if the dual dictatorship had had their way. Wood fungus, real or imaginary, saved the day.

The power of falling water has been usefully employed since the Han Dynasty between 202 BC and 9 AD, with trip hammers used to pound grain, break iron ore and in early paper making.

The first known use domestically was when a private hydro electric project was used to power a single lamp in the Craigside country house of Lord Armstrong in 1878.

Within 10 years, hundreds of hydro power plants were in operation, showing how quickly new technologies can take off when the timing is right.

Craigside became the first house in the world to be lit solely through the use of hydro electric power.

In contrast to his many positive inventions, Baron Armstrong is regarded as the inventor of modern artillery.

He was knighted in 1859 after giving his gun patents to the Government, and was raised to a peerage by Queen Victoria in 1887.

There is no record of his receiving such accolades for his much more important development of hydro power as a valued and sustainable electricity source.

The power of the gun won accolades over the development of power for peaceful use.

As an engineer, scientist and philanthropist, Baron Armstrong later called on Shaw to transform the house into a state-of-the-art mansion incorporating a science laboratory and an astronomical observatory.

Craigside became a place of wonder, incorporating features we now take for granted. These included a passenger lift, fire alarm buttons throughout the house, a Turkish bath suite, and a new invention called a telephone.

In 1868, a hydraulic engine was installed to also power appliances, including the lift, a rotisserie oven and a clothes washer.

Two years later the project was expanded by providing sufficient water storage to power a dynamo, creating one of the first hydro electric power stations in the world.

In 1880, the original arc lamps were replaced by incandescent lights; the first use of this technology in the world.

The turbine system was powered by a 17 metre long Archimedes Screw, providing more than enough energy to power and light the whole house.

Craigside is located just north of Rothbury, Northumberland, UK. The house is set in one of the largest rock gardens in Europe, and is surrounded by coniferous trees and rhododendrons. The extensive gardens slope down to meet the Debden Burn.

At its peak, the estate covered 1729 acres (700 hectares). Past visitors to Craigside included the Shah of Persia, the King of Siam and the Prince and Princess of Wales.