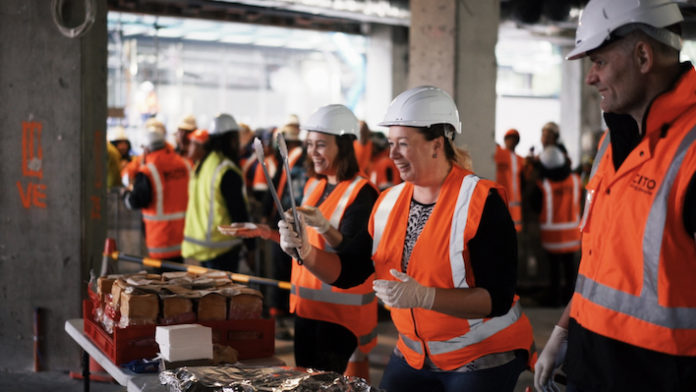 A benefit of face-to-face networking is that it starts ongoing relationships from friendly, helpful beginnings, and this type of engagement also builds trust and brand awareness.

BCITO field teams go all out to get amongst the industry at opportune moments — to speak to large groups who may or may not have heard of the BCITO before, and to spread the word to employers about why to train apprentices.

The training organisation strives to talk to the many people working in the industry who have never thought about becoming qualified.

One of the biggest challenges they face is filling in the knowledge gap. When BCITO representatives meet new people who haven’t spoken to them before, they are often not aware of how easy is it to get a formal qualification.

A lot of people don’t know that all that is required to enter into an apprenticeship is to have a full-time job within the industry.

The BCITO’s office in Newmarket, Auckland, had a great view of the new Westfield Mall while it was getting a full makeover recently.

The build was budgeted at $790 million, and the team watched on as it literally “sprung up” over eight months.

But how to seize the opportunity to engage with this captive audience was top-of-mind.

With between 700 to 1000 workers on site each day, the BCITO’s Newmarket team got in touch with senior site management and asked if they could provide a barbeque for the entire team for lunch one day, soon before the project was completed.

The idea was welcomed immediately, and 10 days later around 25 BCITO people with four barbeque trailers cooked 2000 sausages and 150 vege patties, all delivered on 120 loaves of bread.

They catered for approximately 900 workers from more than 10 different trades, and the largest BCITO cook-up ever was very well received. Some of the Auckland MBIE team joined in as well.

The lines were long, the weather was not so good, but they got through these challenges with determination and military-like precision and organisation. With four serving stations, they fed everyone in a timely fashion.

Food is becoming more recognised and important in community engagement. It’s not just a drawcard to get a free feed — it’s a major tool for enhancing opportunities and getting people to congregate and chat.

The BCITO’s business development team engaged with the workers to gather leads and to generate ongoing conversations throughout the three hours they were on site.

This was one very successful event where the BCITO gathered more than 40 leads, organised many personal follow-up visits and, one week later, already have three confirmed apprentice sign-ups.

At this event, the BCITO marketing team brought along a camera crew and spent time interviewing people. The short film produced can be viewed at bcito.org.nz/engage.