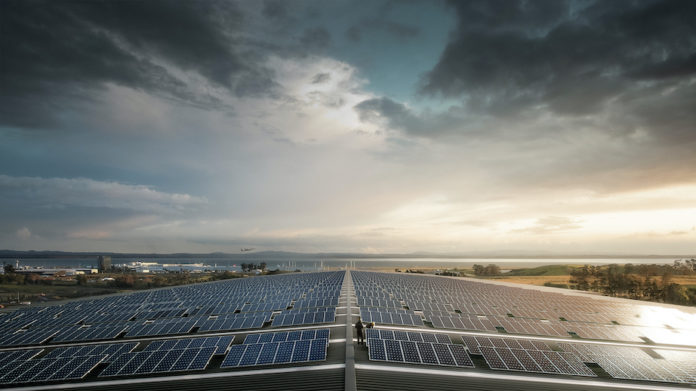 Foodstuffs North Island (FSNI) will install the largest array of solar panels in New Zealand on the roof of its distribution centre currently under construction at the Landing Business Park near Auckland Airport.

A contract has been awarded to Reid Technology, a privately-owned New Zealand company, for the supply and installation of a 1.166MWp grid-connected solar panel system.

This incorporates 2915 solar panels covering a total area of about 6000 square metres, and will generate an amount of electricity equivalent to the power needs of 213 average New Zealand homes per year.

Technically known as a photovoltaic (PV) array, this renewable energy solution has been designed to make the office completely “zero carbon” for operational electrical consumption related to the office, something that will be confirmed during its first year of operation.

This facility, being the largest distribution centre in New Zealand, offered a rare opportunity to realise such significant carbon reductions.

“This major solar panel installation and the creation of a 5 Greenstar New Zealand Green Building Council (NZGBC)-rated office complex is the first of its kind at this scale for New Zealand,” Rowles says.

“It is very much in line with our aspiration of working towards a more environmentally sustainable business.

“This entire project will see the establishment of an ambient distribution centre and the consolidation of the operations of three existing centres.

“This is an example of our commitment to working smarter and reducing our carbon footprint, while enabling the business to keep prices low and quality and service high.

“At Foodstuffs we are enormously conscious of our obligation to be a sustainable business and a positive force for New Zealand.

“We recently joined the Climate Leaders Coalition to formally link our sustainability ambitions to the Coalition’s mission to work towards a low emissions future.

“This array project is just another example of the constant evolution of our business. The new distribution centre and 5 Greenstar office complex, with such a powerful shift in electricity self-sufficiency, demonstrates our long-term commitment to operating in the most sustainable manner.”

The array generates enough electricity per year to drive 588 electric vehicles (EVs) a distance of 15,000km. Offsetting the electricity will result in savings of 194 tons of CO2 per annum.

Any excess electricity will be sold back to the grid, albeit the design minimises excess.

Simon Wilson of RDT Pacific, the director and sustainable development advisor for the project, says the economic viability of this system for Foodstuffs signals a turning point in the industry.

“As a major electricity consumer, Foodstuffs has obvious purchasing leverage and the solar option still stacks up. For this reason, this renewable energy solution should be attractive to many more businesses,” Wilson says.

Shay Brazier of Revolve Energy, the PV consultant for Foodstuffs, says innovation in PV technology has continued to drive down international prices, allowing PV to begin to compete with conventional energy generation sources in New Zealand.

“We applaud Foodstuffs for this strategic initiative — they are setting a benchmark for other New Zealand businesses.”

• It will be the largest PV array in New Zealand.

• It will be installed on the roof of the FSNI new distribution centre at the Landing Business Park.

• It is estimated that the PV array will generate enough electricity to offset the electricity consumption of the office.

• The electricity generated by the array in one year will be sufficient to power 213 average New Zealand homes, reduce the release of 194 tons of CO2 into the atmosphere, and drive 8.8 million kilometres in an electric car — the equivalent of nearly 600 EVs driving 15,000km per year.