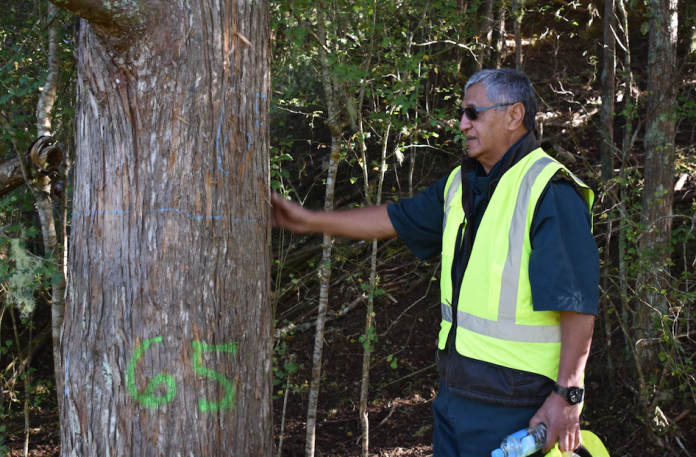 JSC Timbers of Riverhead has placed the first commercial order for farm totara timber harvested and milled as part of a two-year study to test the practicality and commercial viability of a new industry based on regenerating farm totara from private land in Northland.

The company placed an order with the Totara Industry Pilot (TIP) project for 10 cu m of KD 25mm boards, to be used for interior applications such as exposed beams, fins and rafters, and sarking.

JSC Timbers’ Johnny Dobbyn says he expects to make further orders within the next six months.

The order comes on the back of market testing conducted with JSC Timbers in February when it received 8 cubic metres of 25mm and 50mm boards from the TIP.

“Our customers responded really well — they love the idea of being able to source sustainably-produced New Zealand native timber in long lengths, and they adore the look of the product,” Dobbyn says.

One firm of architects had specified farm totara for all interior wood finishes for a beach house.

“It looks absolutely stunning, and is testament to the care and detailed attention that has gone into the TIP project to ensure it lives up to its kaupapa, and helps restore the mana of this highly prolific native species,” Dobbyn says.

JSC Timbers has explored the potential for farm totara in commercial applications too. The company has tested the timber’s reaction to fire-retardant coatings so it can be used in malls, offices and other large commercial buildings.

A second, smaller order of TIP project timber is being used in the Te Hononga, Kawakawa Hundertwasser Memorial Park project in Kawakawa.

Two-and-a-half cubic metres was used to produce laminated beams that will be used in the revolutionary rammed-earth building, destined to become a community and tourism focal point.

Tipene also sits on the Kawakawa Hundertwasser Board, which is co-ordinating the Te Hononga project.

“This reflects the spirit of the TIP project — realising the potential of this Northland resource for the benefit of the people of our communities and holding true to the value of kaitiakitanga, to ensure sustainability.”

TIP project manager Dr Elizabeth Dunningham says further orders were in the pipeline for the milled timber resulting from the 300 cu m of farm-totara logs to be harvested to date by the project.

She says the initiative’s steering group had received “a steady stream” of enquiries since the first project harvest in May 2018. Requests had covered a range of applications, from traditional to avant-garde.

Some of these were for significant volumes of timber (5 to 65 cu m), showing that even before an ongoing supply had been established and the timber promoted, there was some interest and demand.

“Market testing is a primary objective of the TIP project, so it’s gratifying to see these enquiries come in on the back of very little actual marketing to date,” Dunningham says.

The project has commissioned a detailed analysis of the potential market for a Northland-based industry based on the sustainable management of regenerating farm-totara.

This has identified potential market sectors, development strategies for these, and possible commercial partners.

The Northland Totara Industry Pilot (TIP) is a two-year project which started in April 2018. It will assess the forest resource, harvest and process up to 500 cu m of farm-totara logs, collect data and research results from drying studies and trials, conduct milling trials, product and market testing, and develop and analyse the business case for a regional totara timber industry.

The project promotes the sustainable management of totara on private and Maori land, for all the benefits that native forests can bring.

Restructures and redundancies on the rise for businesses