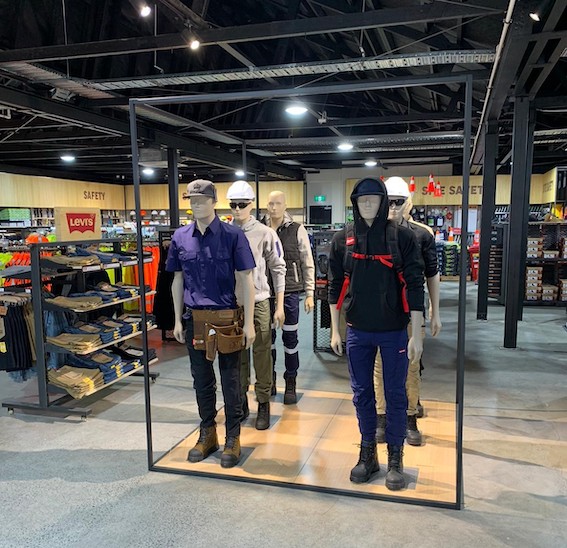 A new 1000 sq m flagship retail store set to cater to a growing trend in fashionable workwear in the trade industries has opened in Auckland.

According to industry experts, the trend is being driven in part by an increase in the number of women entering trades — which data from NZ Statistics shows is up 39% from a decade ago.

The durable workwear labels designed for the “fashion-conscious tradie” are now sold alongside tools, engineering supplies, safety and personal protective equipment (PPE) in a retail environment which, for the first time, has mirrors and changing rooms — features that retailers say would have been unheard of in this industry even just a few years ago.

The NZ Safety Blackwoods store, part of the Wesfarmers Group, is the start of a retail expansion plan for the New Zealand market over the coming year.

The Penrose store footprint is twice as large as the chain’s next largest store, and will be their 30th store in New Zealand, and the first of two new stores to open in the Auckland region, along with the recent relocation of its Frankton store in Hamilton.

This transition comes along with increasing numbers of women entering trade industries, and Mason says the company’s retail face has evolved to meet this changing demand.

He says retail outlets in their industry are notorious for being dirty, dusty stores with empty shelves and poor service.

“The old school self-image of the typical New Zealand tradie has changed over recent years, and this has manifested in a growing design trend for more stylish workwear which was traditionally seen as purely functional.

“More commonly now, they are looking for workwear that they can come off the site, take off their work boots and head down to the pub.

“The designer label on their work clothing is just as important to them as their casual clothes are, and a range of recognisable fashion brands like KingGee, Levis and FXD have developed an offering to meet this need.

“At the same time, we are also seeing nationwide advertising campaigns which feature high profile sporting stars as they move to target a mainstream audience.

“As a retailer, our offering has evolved to provide the service levels to match the positioning of this style of attire, which now includes a more customised fitting service,” he says.

“There is plenty of activity in the construction and other trade industries, as well as a buoyant residential DIY market which is driving growth at a retail level.

“Overseas health and safety concerns are now driving a trend towards construction sites operating entirely without power cables, and this is also emerging here, with a noticeable shift in demand for cordless tools.

“Another technology trend is driven from the recognition that situational awareness is a causal factor in a significant number of workplace accidents.

“So the use of bluetooth-enabled communication devices on the worksite is becoming more prevalent as a way to alert workers to hazards,” he says.

Mason says the investment in a local omnichannel expansion programme will cover bricks and mortar stores, as well as their e-commerce platforms.

“We are seeing more tradespeople working in smaller teams now, and there is a move towards a centralised purchasing model where being able to get everything they need to get the job done in one place means greater efficiency and less time away from the site.

“Offering an integrated retail solution provides access to a wider range of products with the minimum time needed to make the purchase,” he says.

Mason says the number of customers using click and collect has doubled in recent months.

The new store will include a touch screen terminal that allows customers to order from more than 100,000 products — with the option of delivery to their worksite or collection from one of their 30 trade centres nationwide.